Gaming Heads is giving away a Tomb Raider™ III: Adventures of Lara Croft Exclusive Edition Statue! To enter, follow us on Facebook, Twitter or Instagram by Friday, January 18th, 2019 -- or all three to increase your chance of winning!

The second of six statues in the Tomb Raider™ 20th Anniversary Statue Series, the Tomb Raider™ III: Adventures of Lara Croft Exclusive Edition Statue is carefully cast in polystone resin and hand-painted by artists to exacting standards. At 1:6 scale, the statue stands approximately 12" tall, including the base.

The exclusive edition is only available on GamingHeads.com and is being produced in a limited quantity of 500. It includes two different pairs of swap out arms and can be posed either holding a shotgun or dual wielding uzis.

Each statue arrives in deluxe full-color packaging, has a hand-numbered base, and includes a certificate of authenticity that allows you to purchase the same edition number for future releases in the Tomb Raider™ 20th Anniversary Statue Series. 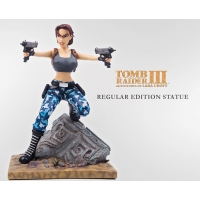