Gaming Heads is proud to introduce the second in our 12 inch Team Fortress 2 line, the Soldier!

Though he wanted desperately to fight in World War 2, the Soldier was rejected from every branch of the U.S. military. Undaunted, he bought his own ticket to Europe. After arriving and finally locating Poland, the Soldier taught himself how to load and fire a variety of weapons before embarking on a Nazi killing spree for which he was awarded several medals that he designed and made himself. His rampage ended immediately upon hearing about the end of the war in 1949.

We have used the actual game files to create the statue to make the definitive version of the Soldier. He measures approximately 13 inches tall, including the base. Cast in high quality poly-stone, the statue is hand finished and hand painted to exacting standards.

Comes packed in a foam interior full colored box with a card of authenticity. Highly limited at only 300 pieces available worldwide.

This is the second in our Team Fortress 2 line. Low numbers will be given on a first come first served basis! If you have already ordered the Heavy and validated, our validation system allows you to collect the same number of the Soldier. 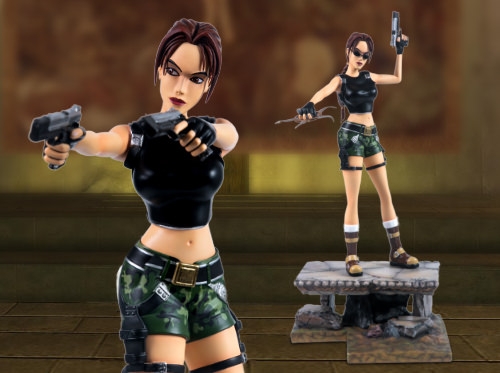 Tomb Raider: The Angel of Darkness - Lara Croft statue is now available for pre-order. Order her now with Worldwide Shipping. Sign up for Gaming Heads email and be one of the first to know about our amazing new products.