“You will not die this day Kratos. The gods cannot allow one who has performed such service to perish at his own hand…” ~Athena

After confronting and slaying Ares, Kratos realised that the nightmares that had been haunting him for the past decade would never leave, and sought an escape from the memories plaguing his mind. After throwing himself from the highest mountain in Greece into the Aegean Sea, Kratos was miraculously spared from death by the gods. In thanks for putting an end to Ares' reign of destruction, Kratos ascended to take Ares' place on his throne as the new God of War.

Gaming Heads is proud to showcase Kratos on Ares' Throne, depicting the ultimate scene at the end of the original God of War. The entire scene has been cast in high quality polystone resin, and has been hand painted to allow for the most intricate of detailing. Kratos is depicted at ¼ scale, meaning that the entire piece is a breathtaking 29 inches tall to the top of the throne's spires.

This is the exclusive edition of Kratos on Ares' Throne. In this version, Kratos is wearing Ares' armour.

The Bad:
I usually nit-pic all of my statues and see if the quality equals the wait time in production and price. The major issues with the statue is small but noticeable. For one, the pose. Due to the pose being the same as the regular, "unarmored" version a large chunk of the armor was cut to allow for his "resting" arm. This is an odd choice and one that could have been avoided by moving his arm slightly. Another issue is the chin. The way Kratos' goatee is painted looks like he has a long and very narrow chin.

The statue also is a bit downgraded from the promo images with sculpting in the armor being smudged and some detail is lost in the base.

Overall this is an impressive statue and while I have a few nit-pics this is a beautiful statue and a must-have for God of War fans. Review by Eye of Chaos / (Posted on 6/9/2018) 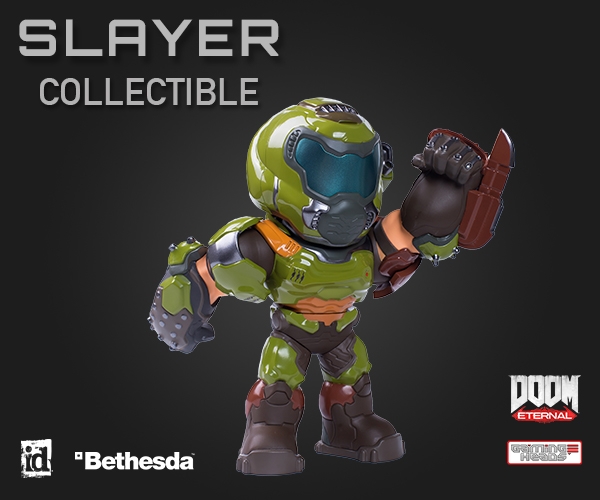 RIP & TEAR with the DOOM: Slayer collectible by your side. Sign up for Gaming Heads email and be one of the first to know about our amazing new products.